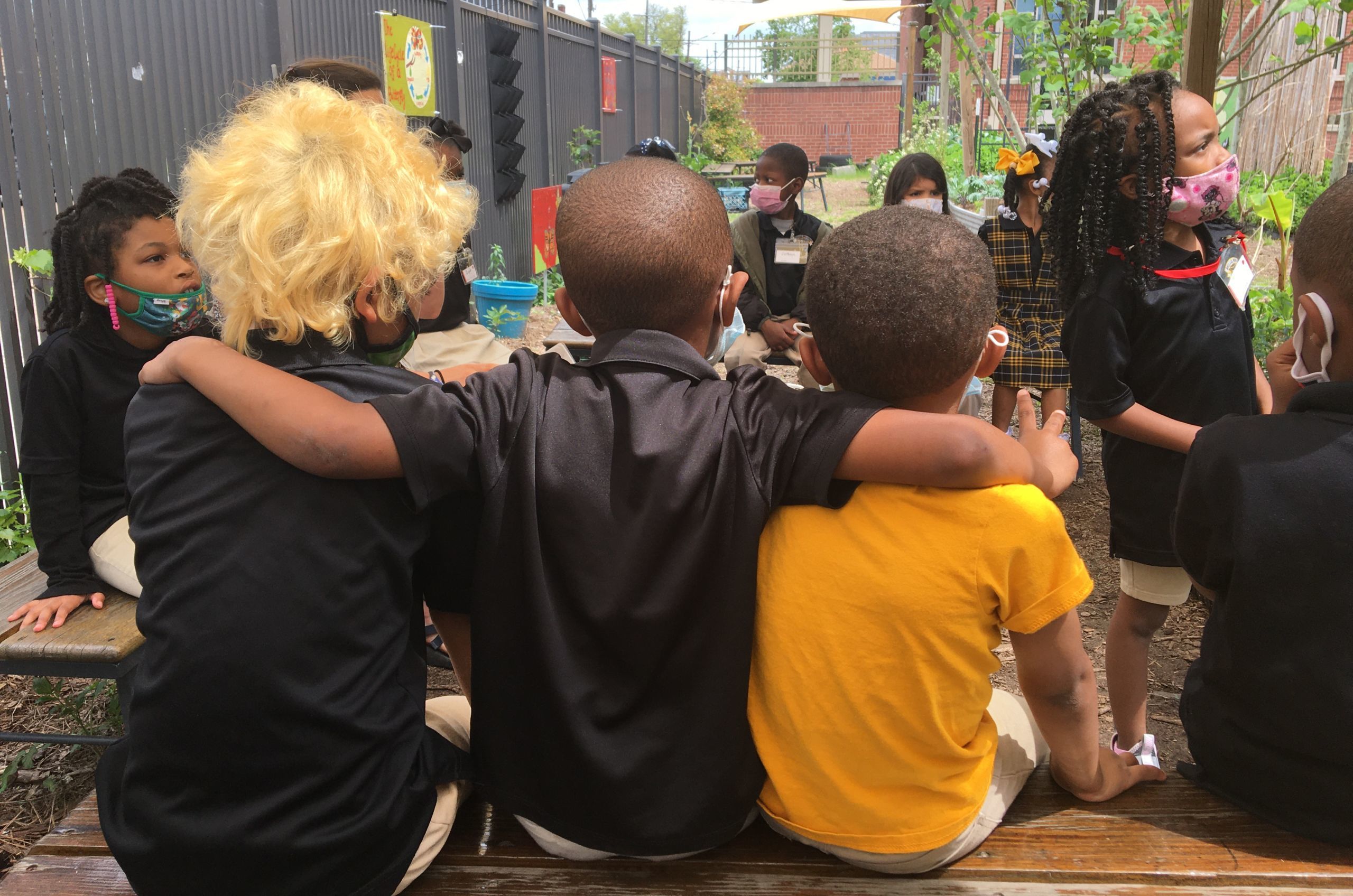 Charlotte Steele waits in the hallway for her kindergarten students to arrive for garden class. She uses the free moment to send out a text about the next day’s Anti-Racism Media Club. Charlotte, lead garden teacher at Phillis Wheatley Community School, has played many roles this year. She leads the Wheatley garden team of three educators, and is in charge of maintaining the one-third-acre school garden with her colleagues. She co-facilitates our program’s Anti-Racism Media Club, which meets several times per month. She is a garden education department chair, and facilitates professional development for other ESYNOLA teachers on self-care, giving good directions in classes, and culturally relevant pedagogy. And in the fall, after a teacher in the building moved into a coaching role to support literacy in K-2 classrooms, Charlotte became a kindergarten teacher for a few months. She has bounced and adapted a lot this year, and she continues to show up for students with her whole self.

The students arrive, bubbly, clearly excited to go outside. Charlotte guides her group to the garden, taking care to let a student who is new to the school lead the way and take in the garden for the first time in the front of the line.

This week is this class’s second week in the garden. The students are still learning their jobs, and learning the garden promises. Class begins with two students leading warm-up exercises of their choosing—push ups, jumping jacks (they really like jumping jacks, and try to do them twice)—as the other students count to ten for each exercise. 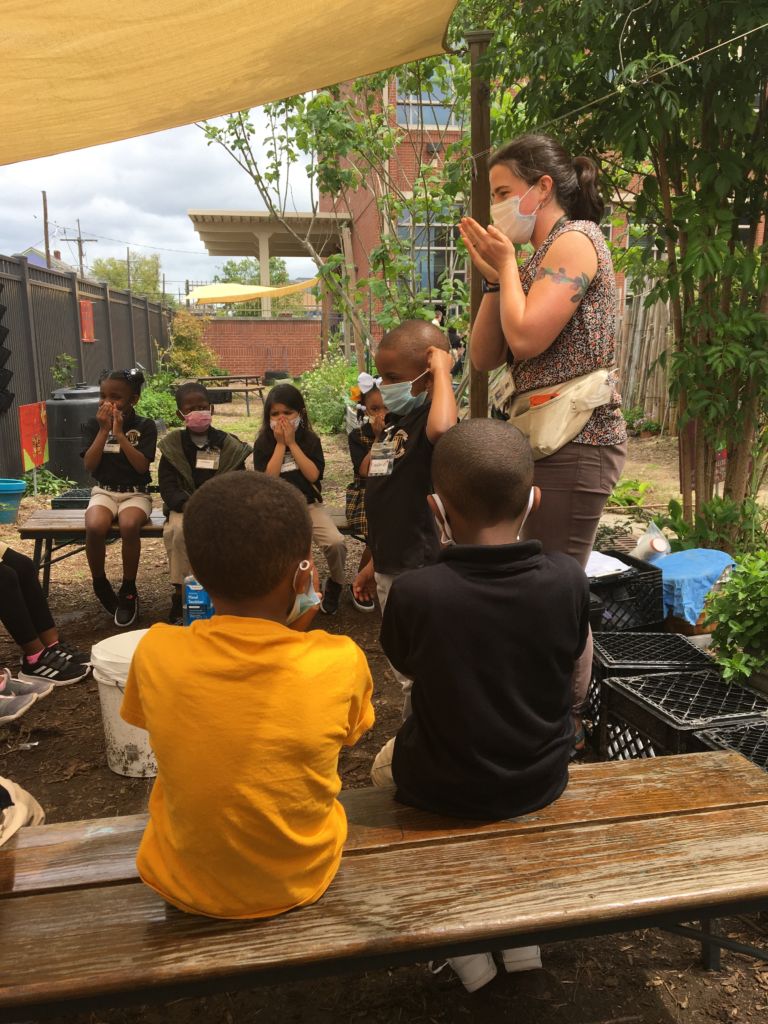 Another student starts his job: leading a breathing exercise. “Cup the gumbo in your hand, smell the gumbo really big, and blow on it to cool it down,” he says. Charlotte reinforces by demonstrating the action alongside him. In a moment of synergy, students inhale the scent of invisible gumbo in their hands just blocks away from Dooky Chase Restaurant, home of Leah Chase’s famous gumbo. These moments of connection to the history of the neighborhood are intentional, and grounding.

Next comes an emotional check-in activity, also student-led. A student reviews the numbers and corresponding feelings on a sign above her, and all the students hold up their numbers about how they feel today: chill, excited, angry, sad. There is a range of feelings in the group.

“Now,” Charlotte says, “Take your fingers and tap, tap, tap your head and think, why do I feel this way today? What happened before now, or what are you thinking about that makes you feel the way you do? Turn to your partner, and share. Tell them, ‘I feel … because …’”

The students turn to their shoulder partner and take turns sharing about their feelings. This is the kind of social-emotional learning opener that happens in different forms in all ESYNOLA classes. Students build self-awareness through identifying their emotions, and social awareness when they take in each other’s perspectives and build empathy. As two boys share why they feel the way they do, their hands touch in a tender gesture that silently says, I’m listening.

The lesson today is on one of the garden promises: Ask before you harvest or taste. After discussing what the word harvest means, Charlotte demonstrates how to harvest with two hands by using another regionally-appropriate analogy. “Let me see your crawfish pincers!” All the students know what to do instinctively, and hold up their pointer fingers and thumbs, making pinching gestures. “Hold the stem with one hand, harvest with the other!” she says. One student administers hand sanitizer, and off goes the group to harvest parsley to put on popcorn in their cups.

This all may sound beautiful, and it definitely is. It’s a bright spring day. Students smile in the sun, pointing out butterflies and other critters they see. They are breathing, using their bodies, expressing their feelings, and building deeper connections with each other. And these young students are also actively processing everything that is happening in their lives, in their academic classes, in their developing minds and bodies, and processing can be tough at times. Some students have difficulty staying in their own personal space, and start to irritate other students. There are requests to go to the bathroom, and frustration when the bathroom pass is already out on loan. In garden class, Charlotte is navigating the limited time she has, the flow of the lesson, the action of the group, and changing individual student needs at any given moment.

What does she do? For a class incentive, Charlotte carries a clipboard. Every time the group works together to complete a direction or activity with 100% participation, she adds a petal to a flower. A full flower equals a sticker, eight stickers equals a smoothie party for the class.

And what does she do about individual students expressing big feelings? She pulls them closer. She holds their hands, and sits next to them. She speaks and listens to them in between giving directions to the group, praising them for asking for what they need and calmly giving the context behind the rules of the space, which helps them calm down, feel safe, and learn the differences between garden class and recess. The garden is mere feet away from the playground, and recess is in full swing for another class at this very moment, with some students peering curiously at the harvesting kindergarteners. On the other side of the fence people are laughing loudly on the sidewalk as they line up for Willie Mae’s for lunch, cars cruise by with loud tunes, soon the school buses will begin to line up, and the list goes on. Garden class is a juggling act to which students and teachers are constantly adjusting, trying to keep everything moving and not leave anyone out.

With all the popcorn eaten, garden class is coming to a close. Students reflect on the taste of parsley. One says it tastes minty, another says it’s spicy. A student collects name tags in a bag while singing a name tag song, and other students dance. Shout outs begin, aligned with school values: respect, teamwork, and focus. One student gives gratitude to her friend for how much she helped her while harvesting. A student who had been taking some time in a calm-down spot because he was experiencing frustration gives Charlotte a thumbs up, indicating that he’s ready to rejoin the group. Charlotte is exuberant. She gives him an elbow bump on his way back to his spot on the bench, saying “Yay, now we get to have you back in class!”

Charlotte leads the kindergarten students back through the garden, and has them stomp their way up the ramp to get the mud off their shoes before entering the building. Before reaching the door, one girl leans over and picks something up. In the hallway she taps Charlotte’s arm, and in one short sentence sums up why garden class, and everything Charlotte works so hard to do, is so incredibly important.

“Here,” she says, handing Charlotte a small snail. “I wanted to make sure she would be safe.”

We are excited to announce that Edible Evening is returning this spring!

Get your tickets now!